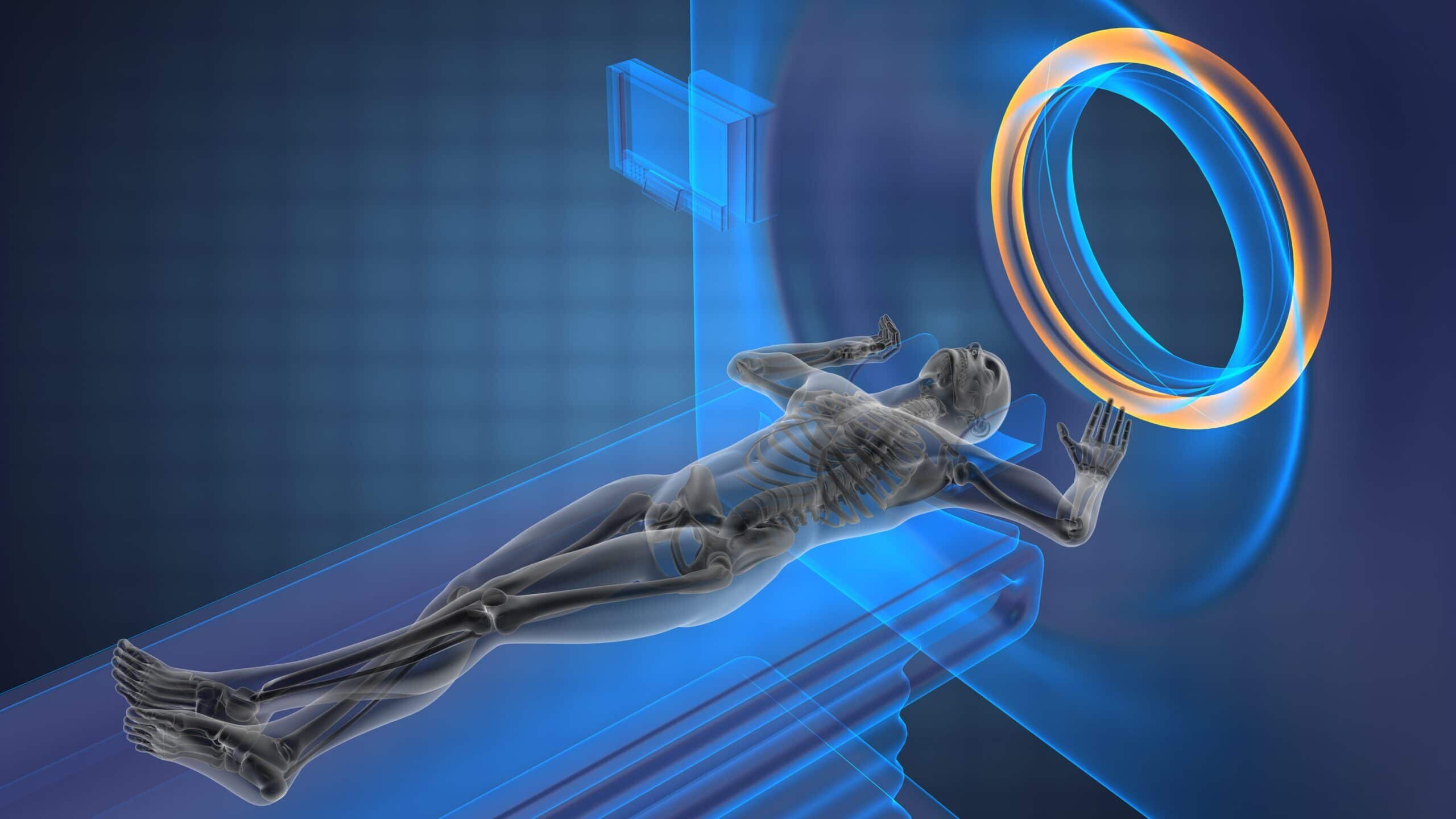 The 2003 Nobel prize in medicine was awarded jointly to Sir Peter Mansfield and Paul Lauterbur for their contribution towards the development of magnetic resonance imaging (MRI).  However, Raymond Vahan Damadian in 1977 was the first to perform a full-body scan of a human being to diagnose cancer.

The principles of magnetic resonance imaging

The images are generated by spatial variations in the phase. These are dependant on the radiofrequency energy,  which is absorbed and emitted by the imaged object. Several biologically active nuclei can produce magnetic resonance images including hydrogen, oxygen-16, oxygen-17, fluorine-19, sodium-23 and phosphorus-31.

The human body contains 63% hydrogen atoms from its fat and water components. Each hydrogen nuclei has a characteristic NMR signal which enables clinical magnetic resonance imaging to generate pictures.

A way of understanding this is to imagine the protons behaving like tiny bar magnets with the associated north and south poles lying within the domain of the magnetic field.  However, the magnetic moment of a single proton is tiny and undetectable whereas the orientation of the protons is random in the setting without an external magnetic field.

In order to produce the magnetic resonance imaging (MRI) signal, an external magnetic field must be applied to allow the protons to become aligned.  This results in an increase in a measurable magnetic moment in the direction of the external magnetic field.  Therefore, by applying a sequence of radiofrequency pulses, various images can then be created based on the change in the signal from the hydrogen atoms in different types of human tissue.

Currently, several MRI systems are used in medical imaging. Regarding whole-body clinical scanners with field strengths of up to 3.0-Tesla; it is important to mention that most MRI scanners have a 1.5-Tesla superconducting magnet. In order to put this magnetic field strength into context, it is 30,000 times stronger than that of the earth.

A complete MRI scan can take up to 75 minutes depending on the procedure involved. These may include scanning the brain, heart, spine, liver and muscles.  MRI data can produce exceptional structural images of the brain and spinal cord.

These images are formed from a series of slices which can be viewed from:

These images are generated in 3 planes and analysed by the radiologist who will provide a clinical opinion.

MRI techniques are useful due to their higher soft-tissue contrast resolution especially in imaging the internal joints, the central nervous system including conditions that involve inflammatory responses.

MRI has advantages over other imaging modalities and these include:

The duration of an MRI image is regarded as a significant disadvantage which continues to be so even with faster computed tomography with the usage of multislice CT technology. To circumvent this, newer imaging techniques such as parallel imaging have been developed which have the ability to generate a faster pulse sequence and therefore higher field strength systems.  The most basic of pulse sequences include T1-weighted and T2-weighted sequences to highlight the differences in the signal of various soft tissues.

Several advanced medical imaging techniques are based on MRI and include:

Several of the above techniques are especially useful in brain imaging and include:

In musculoskeletal imaging, MR arthrography is a technique available to facilitate the depiction of internal derangements of joints.

MR arthrography uses T1-weighted images to convey T1 shortening effects of gadolinium resulting from fat saturation.  The T2-weighted sequence in at least one plane is also necessary to detect cysts and oedema in other soft tissues and bone marrow.