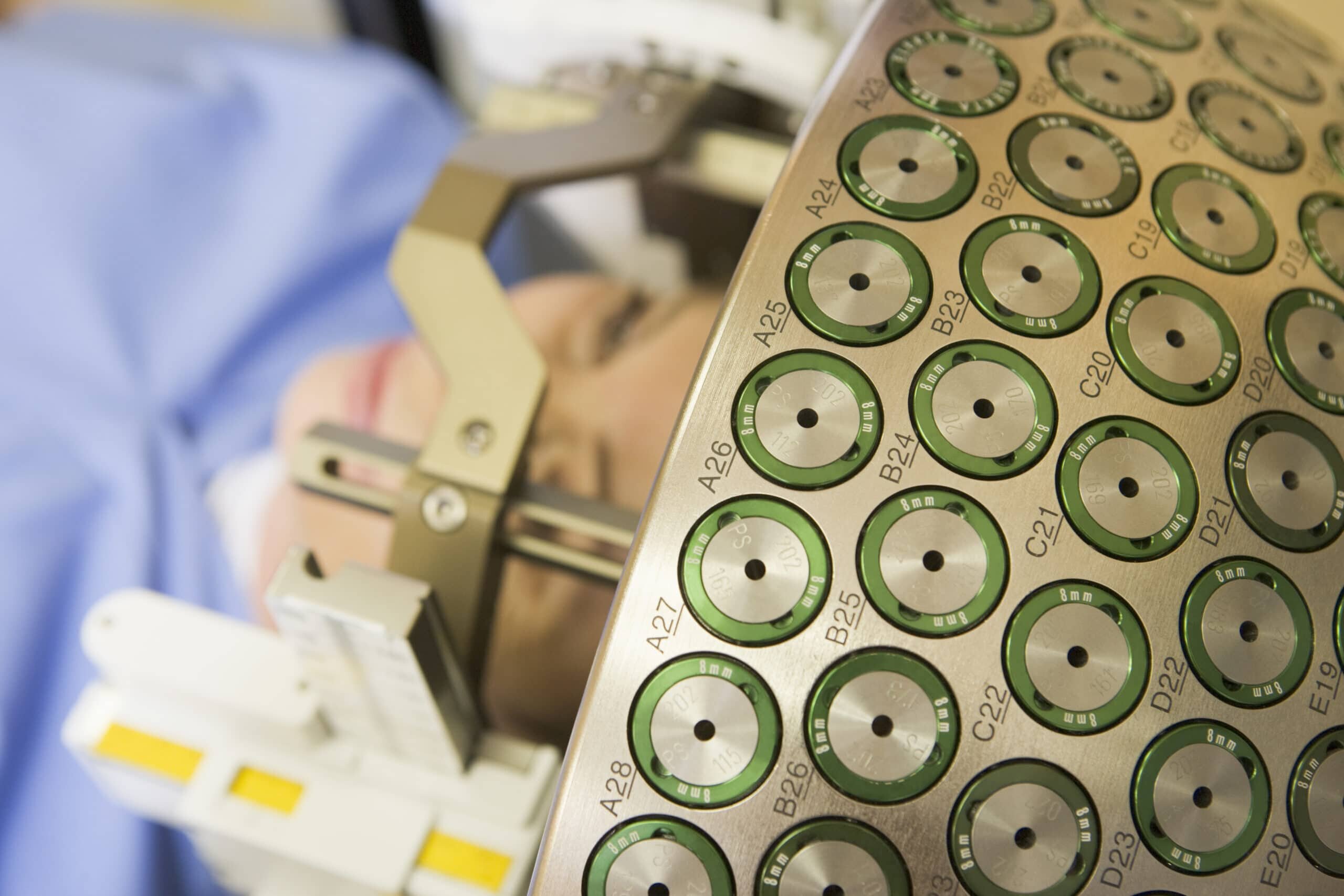 Stereotactic radiosurgery is a non-surgical procedure that utilises gamma radiation for the management of brain tumours amongst others.  The objective of stereotactic radiosurgery is to deliver a high dose of radiation to the tumour site via a gamma knife in comparison to other radiotherapy treatments. The application of imaging modalities such as computed tomography (CT), positron emission tomography (PET) and functional magnetic resonance imaging (fMRI) assists in the treatment planning stage for a patient undergoing image-guided surgery using a Gamma Knife.

These image-guided surgery techniques (Gamma Knife Radiation) are also employed to limit collateral damage to the surrounding healthy tissues. However, when radiosurgery is used to treat body tumours, the procedure is known as stereotactic body radiotherapy.  Both procedures can deliver high precision radiation, within millimetres to destroy the tumour and achieve a permanent accuracy of the radiation delivered.

Both stereotactic radiosurgery and stereotactic body radiotherapy depend on several imaging modalities to generate 3-D scans and computer analysis to determine the exact coordinates of the tumour target within the human body. The patient must be placed in an immobilised state to enable the highly focused gamma-ray or x-ray beams to converge on the tumour (volume) site.  The application of image-guided radiation therapy and additional medical imaging is used to confirm a tumour’s location before administration of a radiation dose.  Image-guided radiation therapy improves the precision and accuracy of the treatment.

The imaging modalities CT, fMRI and PET-CT are all capable of producing 3-D imaging to help safely to locate the tumour mass within the human body.  It is also able to calculate the tumour volume. These scans support the patient’s treatment plan to ensure that the radiation beam can converge on the tumour at various angles.

SRS can also be used to deliver a radiation dose to several therapy sessions.  These radiotherapy sessions depend on the size of the tumour mass and the nature of the tumour.  If larger doses of radiation are required for the treatment plan, the patient normally will receive these over a number of radiotherapy sessions, to limit damage to the surrounding healthy tissues.  Therefore, this fractionating treatment approach allows for high doses to be delivered safely within the target volume.  This approach is called fractionated stereotactic radiotherapy and is usually carried out over two to five treatment sessions.

Both stereotactic radiosurgery and stereotactic body radiotherapy are alternatives to invasive surgery, especially for patients who are unable to undergo surgery and also for tumours and other abnormalities.  In some of these cases, the surgery would be difficult due to tumours being near vital organs/anatomic regions and subject to movement within the body.  Stereotactic radiosurgery is used to treat numerous types of brain tumours including benign and malignant, primary and metastatic. In addition to arteriovenous malformations (AVMs), that disrupts normal blood flow in the brain and sometimes bleeds. Furthermore, radiosurgery machines can treat other neurological conditions such as trigeminal neuralgia (a nerve disorder in the face) and tremor amongst others. The procedure of stereotactic body radiotherapy is utilised in the treatment of malignant or benign small-to-medium size tumours present in the liver, abdomen, lung, prostate, spine, head and neck.

Stereotactic radiosurgery works in a similar way to other forms of radiation treatments. The main difference is that the stereotactic radiosurgery procedure does not remove the tumour, but that the DNA is damaged to stop replication.  After treatment, benign tumours usually shrink within two years and metastatic tumours can take up to 2-3 months.  The treatment of arteriovenous malformations (AVMs) by stereotactic radiosurgery may result in thickening and cut off the blood over several years.  A number of tumours will remain stable and inactive without any degree of change.

The aim of the treatment plan is to prevent tumour growth and in some cases acoustic neuromas which are temporary enlargement and may be observed following stereotactic radiosurgery.  This is due to an inflammatory response within the tumour tissue that over time either stabilises or a subsequent tumour regression is observed called pseudo-progression.

The Gamma Knife uses 192 or 201 cobalt-60 beams of highly focused gamma rays all aimed at the target region. The Gamma Knife is perfect for treating small to medium size intracranial lesions.

The Gamma Knife is a unique system with a frame that allows the neurosurgeon to target a treatment area in the brain with pinpoint accuracy. The advantage of Gamma Knife procedures is that they are non-invasive and can be performed in a single session without general anaesthesia.  The Gamma Knife approach is a cost-effective alternative to open brain surgery and has superior clinical efficiency. Gamma Knife produces a more effective treatment of smaller lesions of the brain with fewer complications.

You Are Here: Home » radiosurgery