A 50-year-old man with prostate cancer was initially treated with radical prostatectomy and pelvic lymph node dissection. He had salvage androgen deprivation therapy (ADT) for persistent measurable prostate-specific antigen (PSA). In 2011, the first recurrence was treated with volumetric modulated arc therapy (VMAT). However, in 2014, an 11C-choline PET/CT scan indicated a second recurrence with new lesions, in two para-aortal lymph nodes. Abiraterone (Zytiga®) gave a fall of PSA from 2.9 to 0.54 ng/mL over four-month period. Following this, a para-aortal lymph node lesion was given VMAT with a boost of 60 Gy. The treatment was well tolerated.

Oncologists give salvage EBRT (SEBRT) with curative intent for patients with the first prostate-specific antigen (PSA) recurrence after RP [2]. In addition, oncologists rarely report treatment of second PSA recurrence. A few studies showed the effect of second-line SEBRT for patients with up to three lesions detected with PET/CT [3]. Another study showed the effect of steroid anti-androgens being changed to non-steroid antiandrogens [4]. Abiraterone is a second-line ADT. Abiraterone prolonged PSA recurrence-free survival for patients with metastatic prostate cancer who have failed with first-line ADT and chemotherapy [5].

We report a case with a second PSA recurrence of castrate-resistant prostate cancer. An 11C-choline PET/CT scan showed two new lesions in para-aortic lymph-nodes. The aim of this case report is to analyze the short-term efficacy and toxicity with abiraterone and volumetric-modulated arc therapy (VMAT).

In 2007, a 50-year-old man underwent RP and limited pelvic lymph node dissection for prostate cancer. The PSA level pretreatment was 18 ng/mL: pathology showed positive surgical margins, involvement of seminal vesicles, bilateral lymph node metastases, and a Gleason score of 9. The PSA did not fall to unmeasurable levels after the surgery. Therefore, he started salvage first-line ADT with bicalutamide and goserelin, followed with bilateral orchiectomy.

In the second quarter of 2009, the PSA became progressively increased.  In June 2011, an 18F-fluorocyclobutane-1-carboxylic acid (18F-FACBC) PET/CT scan showed a lesion in a single pelvic lymph node. The patient underwent VMAT for the recurrent disease and obtained a partial remission for a period of 16 months [6]. In the third quarter of 2012, he had a new rise of PSA. The increase from May 2013 to May 2014 resulted in a decrease in PSA doubling time to 4 months and a PSA velocity increasing to 2.5 ng/mL/year, as shown in Figure 1.

In the fourth quarter of 2013, initial restaging with technetium-99m bone scan and an 18F-NaF PET/CT scan was negative. In contrast, an 11C-choline PET/CT showed a second recurrence, with two new lesions in para-aortic lymph nodes in March 2014. Consequently, he started abiraterone treatment in March 2014 and obtained a reduction in PSA from 2.9 to 0.54 ng/mL within the following four months. Figure 1. The PSA level increased before the start of treatment with abiraterone and declined after treatment. VMAT denotes volumetric modulated arc therapy.

The caudal GTV was 1.1 cm3 and the cranial GTV was 5.9 cm3. The planned treatment volume (PTV) for the para-aortic lymph nodes was 545 cm3. The cranial PTV included the GTV with a 5 mm margin. Figure 3 shows the dose planning summary for PTV for the lymph nodes. 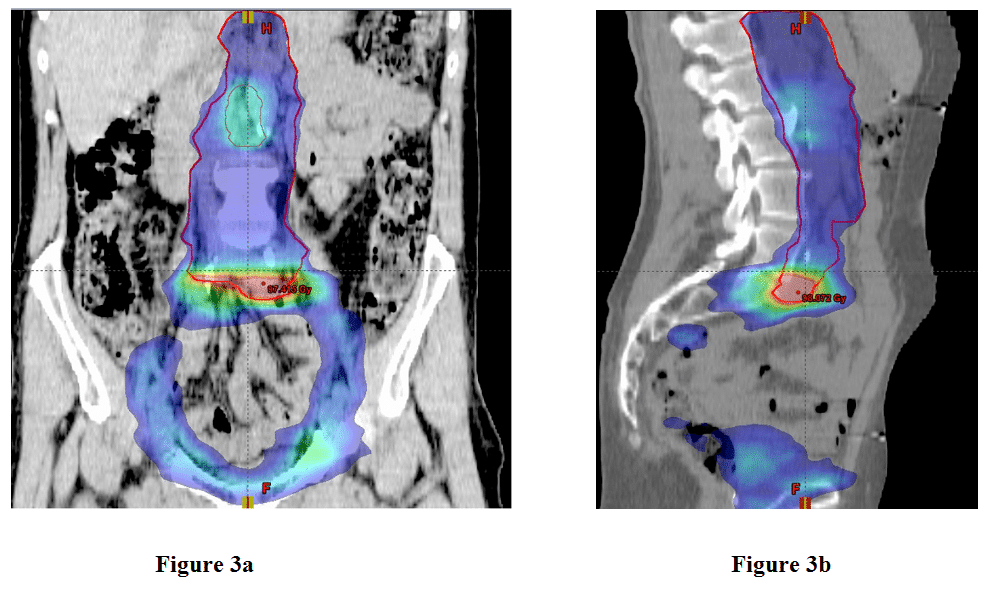 Figure 3. The coronal (a) and sagittal (b) dose distribution for the lymph nodes ranged from 44 to 90 Gy for the total VMAT treatments during the years 2011 and 2014. Planned treatment volume for the new para-aortal lesions is shown as a solid red line.

Constraints for the PTV implied:

(2) A maximum radiation dose should be 103% or less of the prescribed dose;

(3) Dose should be minimal to the surrounding healthy organs at risk, including intestines and corpora of lumbar spine.

The caudal GTV that was already partly treated in 2011 was repeated along with the para-aortic lymph nodes from L1 to L5 to a dose of 45 Gy, in 25 fractions of 1.8 Gy, during a period of 5 weeks. Due to the previous SEBRT, a small overlapping lymph node volume received 90 Gy as a sum dose (V90Gy = 22 cm3). The cranial PTV was treated as a simultaneous integrated boost (SIB) to 50 Gy during the first 5 weeks of treatment and then alone to 60 Gy during the 6th week.

The patient had no acute toxicities during SEBRT and no late toxicity during the next two months. Follow-up after VMAT showed grossly stable PSA levels until August of 2014. The patient has given consent to the treatment and to publication of this report.

(1) PET/CT detected the sites of PSA recurrence while PSA was low;

(2) Change from first-line ADT to abiraterone was based on the 11C -choline PET/CT;

(3) Treatment with abiraterone reduced PSA to a level less than 20%;

(4) The combined abiraterone acetate and VMAT treatment did not increase toxicity and did not cause a PSA flare. Unfortunately, during 2014, the PSA changed less after VMAT than after VMAT in 2011.

This case history reflects recent changes in management to active imaging and treatment of oligometastatic prostate cancer. In 2014, 11C-choline PET/CT scanning became a Danish precedent for restaging for selected patients. With a PSA recurrence <10 ng/mL in the patient, the bone scan was expected to be negative [7]. With a PSA level >1 ng/mg and the PSA kinetics with short PSA doubling time <6 months and a high PSA velocity >2 ng/mL, it was likely that an 11C-choline PET/CT would give positive findings [8]. Positive scans differentiate between local, regional, and distant lesions and influence treatment decision [7].

The oncologist regarded the positive findings of the 11C-choline PET/CT scans as a second relapse of oligometastatic prostate cancer. Accordingly, treatment was commenced with abiraterone, due to the positive results of a trial of metastatic chemo naïve patients, published in 2013 [11]. The patient had a marked reduction of PSA after he started treatment with abiraterone. This is important for SEBRT. Patients who achieved a fall of PSA to <0.5 ng/mL following neoadjuvant ADT before the start of EBRT, had better PSA recurrence-free survival from EBRT, than patients with a more modest fall of PSA [12].

EBRT for the patient followed standard fractionation and cumulative radiation dose. Several studies point to a dose-response relationship between prostate cancer and radiotherapy [13]. In a study, a radiation dose above 80 Gy increased survival rates, than a lower radiation dose [14]. An ultrahigh radiation dose might be needed for tumor control, but an ultrahigh dose may also increase the dose in organs at risk and the overall toxicity.

To circumvent this problem, some studies used an ultra-high simultaneous integrated boost (SIB) dose for lesions detected with imaging systems such as MRI and PET/CT to limited damage to the surrounding organs [15]. Wurschmidt et al. treated PET/CT positive lesions in lymph nodes with 66.6 Gy [16]. However, in direct contrast, in the study by Casamassima et al. the lymph node lesions detected with an 11C-choline PET/CT scan, were treated with 50 Gy in 25 fractions plus 24 Gy in an additional boost [9]. Consequently, we could have increased the radiation dosages for our patient without having caused severe toxicity to the surrounding organs at risk.

This case report is the first combination of abiraterone and VMAT as a new treatment for patients with second recurrence of lymph-node positive prostate cancer. The case report is limited by not having a large patient group to be able to compare and evaluate the findings. There is an ongoing FLAME controlled trial, which compares the outcomes using a boost of 95 Gy to the intraprostatic dominant lesions which have been diagnosed with MRI imaging. This is compared to conventional dose EBRT for the whole prostate gland without guidance for PTV by imaging from MRI or PET/CT scanning [18].

The STOMP controlled trial investigates whether metastasis-directed treatment has an effect for patients with oligometastatic prostate cancer [19]. Several studies investigate the combination of abiraterone and EBRT (NCT01717053 and NCT01780220).

In conclusion, 11C-choline PET/CT restaging of a patient with second PSA recurrence was followed by an effective and well-tolerated treatment with abiraterone and VMAT.

The authors confirm that this article content has no conflict of interest.

The authors thank the patient for information regarding his treatment plan. The Docrates Cancer Center, Helsinki, Finland, performed the VMAT in the para-aortic lymph nodes for the patient.

Copyright: © 2014 von Eyben FE et al. This is an open-access article distributed under the terms of the Creative Commons Attribution License, which permits unrestricted use, distribution, and reproduction in any medium, provided the original author and source are cited.