SARS – Severe Acute Respiratory Syndrome – is a viral respiratory disease caused by SARS-associated coronavirus (SARS-CoV) and is an enveloped virus. The first cases of SARS were recognised in Asia in February 2003 and the virus swept to several countries throughout North America, South America and Europe. Since 2004, no cases of SARS have been reported.  In the previous century, the world experienced three pandemics originating from southern China.  The third plague originated in 1899 and lasted for 41 years.  This is in addition to the two influenza pandemics, the Asian flu of 1957 and Hong Kong flu of 1968. The SARS plague began in November 2002 in the Guangdong Province, China where the virus was transmitted by a physician travelling on 21 February 2003 from Guangdong to Hong Kong. At the hotel, the physician infected 16 individuals and this facilitated outbreaks of the disease in Hong Kong, Singapore, Vietnam and Toronto. After a few weeks, the SARS virus affected more than 8,000 people in 25 countries. It resulted in 774 deaths at the end of the global outbreak on 5 July 2003. The symptoms of SARS are influenza-like and include fever, shivering, headache, diarrhoea, myalgia and malaise. However, no individual indications have proved to be specific for a diagnosis of Severe Acute Respiratory Syndrome, although fever is the most frequently reported symptom. In the majority of SARS cases, persistent dry cough, followed by shortness of breath and diarrhoea developing further into respiratory distress and requiring intensive care. Coronaviruses contain a single-stranded, positive-sense RNA inside an envelope. They are members of the Coronavirinae family and the eight identified human coronaviruses include HCoV-229E, HCoV-OC43, HCoV-229E, HCoV-OC43, SARS-CoV, HCoV-NL63, HCoV-HKU1 and SARS-Cov-2.  The three main groups of coronaviruses are alpha, beta and gamma and in 2012 a novel coronavirus was identified as MERS from the Middle East.  The SARS-CoV contains a spike glycoprotein (S), membrane protein (M) and an envelope protein (E) with a nucleocapsid protein (N). The N protein is required for coronavirus RNA synthesis. The spike glycoprotein contains 1255 amino acids in length and there is up to 27% amino acid similarity among other coronaviruses.  Also, the SARS-CoV spike glycoprotein contains two functional domains called S1 and S2.  The S1 is used for binding to the receptor angiotensin-converting enzyme 2 (ACE2) on host cells and S2 is the transmembrane which facilitates a conformational change and initiates viral and cellular membrane fusion. 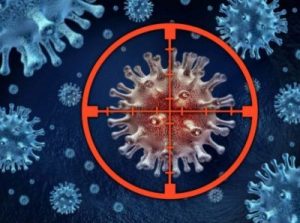